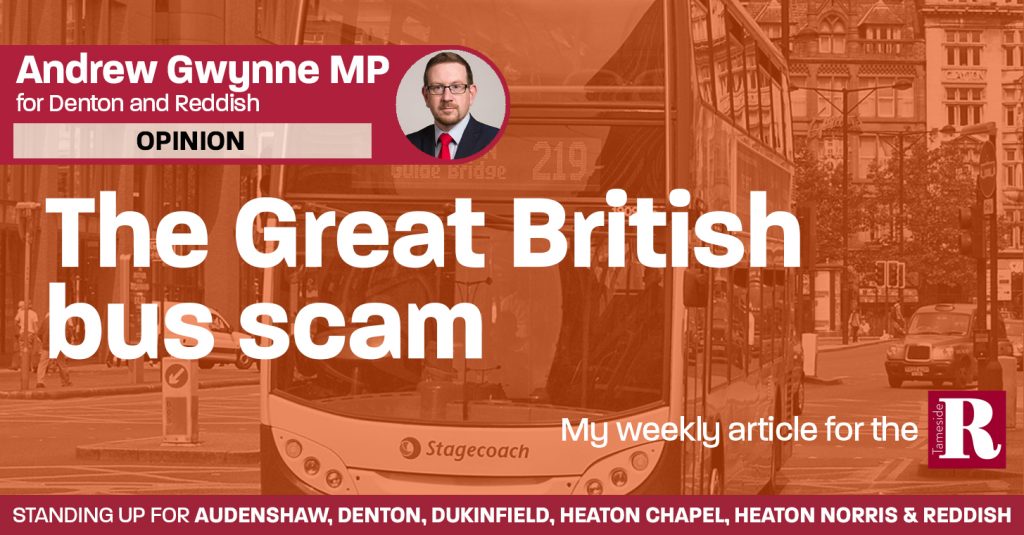 One of the things that is a little unusual about being an MP is living part of the week in London (before the lockdown at least) and part of the week in your constituency. There are, of course, many differences between life in London and life here in Tameside and I’m very lucky to get to experience these differences on a weekly basis. One significant difference – and where Tameside loses out massively – is buses.

In London, there are far more buses, running far more frequently and charging far less. A bus journey in London is just £1.50 and, what’s more, you can “hop” between multiple buses within half an hour of the start of your journey without paying any more.  That means that if you work in a completely different part of the city, you can get to work and back for £3.

So why are buses so much better in London than in Greater Manchester?

The Thatcher Government passed a law which meant that all bus services in England, Scotland and Wales were deregulated – but crucially not in London. This deregulation introduced competition into the system, with rival companies fighting over the best routes and dropping any routes deemed not to make enough profit, however vital to the local community.

Here in Greater Manchester, councils got together to create a single bus company out of the old bus network called GM Buses. Bus wars ensued but other companies struggled to challenge GM Buses. The Major Government forced the break-up of GM Buses into GM Buses North and GM Buses South and their privatisation. Both were initially sold to the workforce as cooperatives but it wasn’t long before the “Big Two” moved in like vultures – FirstBus took over GMN and Stagecoach GMS.

Unfortunately, we are still living with the legacy of deregulation. At the end of this month Stagecoach are making major changes to multiple routes across Greater Manchester without having consulted at all beforehand. In my own constituency, the most damaging of these changes is the decision to shorten the 205 bus route. This means that there will no longer be any bus link between Dane Bank and Denton Town Centre – a whole community cut off from the town centre services that they use.

This just goes to underline the importance of re-regulation of bus services. We need a public transport system that works for the community and isn’t based solely on squeezing the greatest amount of profit out of passengers. Luckily, this is a priority for GM Mayor Andy Burnham and the Bus Services Act will allow him to create a much better system that works for local people.