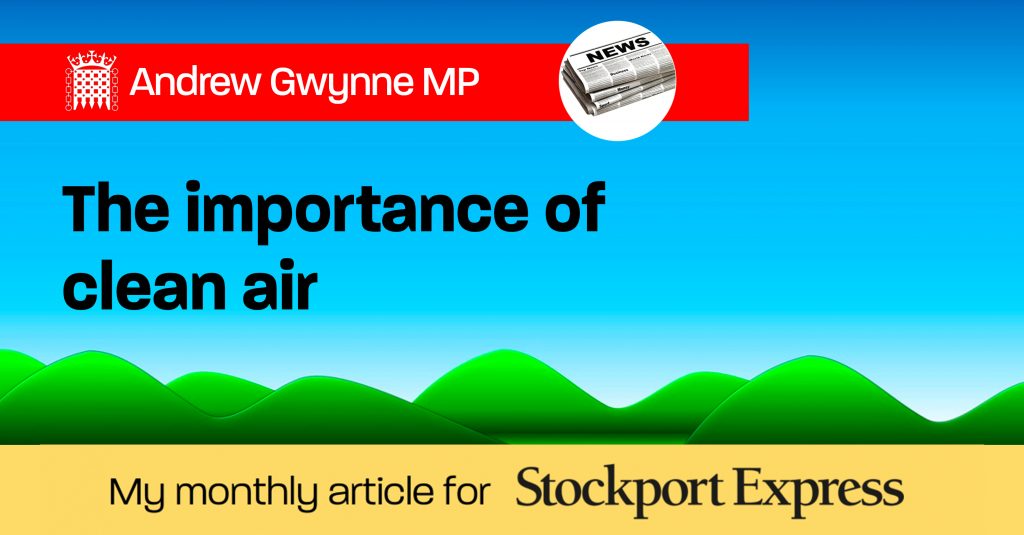 We all remember seeing pictures in our school history books of factories and mills belching out smoke, or Lowry’s matchstick men, cats and dogs striding around beneath countless smoking chimneys. It’s an important part of our industrial heritage, but these scenes have largely been left in the past.

This isn’t the case everywhere. I recently returned from leading a delegation of British MPs to China, and in Beijing and other Chinese cities similar sights can be seen today. People walk through the streets in masks and the smog can be heavy, making it hard to see. It makes you realise how lucky we are to live somewhere where you can breathe easily and where the sky isn’t hidden behind a wall of pollution.

We shouldn’t allow ourselves to be lulled into a false sense of security though – air quality remains an issue in our borough (for example, 20 roads in Stockport have illegal levels of air pollution) and it’s a very real threat to our health and wellbeing.

Across the globe, air pollution kills around 7 million people every year. Tragically, this includes around 600,000 children. These deaths aren’t just in those areas where pollution is most visible – far from it. In the UK, it’s estimated that air pollution contributes to around 64,000 deaths every year. In Greater Manchester alone, around 1,200 every year have their lives cut short as a result of the quality of our air.

These shocking figures underline the importance of cleaning up our air, not just to protect the environment but also to protect our friends, families and communities.

Plans like the proposed Clean Air Zone have attracted some criticism, but it’s clear that we can only reduce pollution levels – and in doing so, save lives – if we take strong direct action.

We also need to protect our green spaces and this is why I’m so passionate about ensuring that the Bredbury Park Industrial Estate doesn’t encroach further on the Tame Valley. Hundreds of residents have marched against the plans and I hope that developers take this on board and think again.

Improving air quality in Stockport won’t be easy but it is something that needs to be done – for all our sakes.