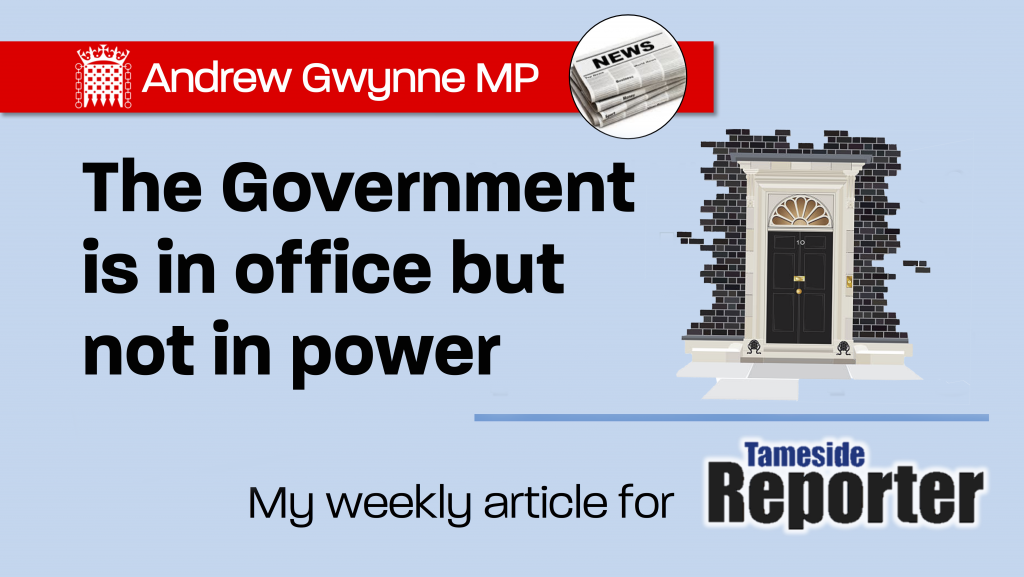 Two weeks ago I began my 15th year as the Member of Parliament for Denton and Reddish (which includes Audenshaw and Dukinfield, too). It’s my home area and I remain as proud and privileged to represent my own community in the House of Commons.

Over the 14 years I’ve served as MP, I’ve seen political highs and lows; tricky moments for governments of all colours, and I’ve witnessed some good moments, too. I’ve had my own successes and I’ve had, and shared, frustrations. But it’s fair to say that I’ve never known a Government so incapable of governing and a Parliament so devoid of any meaningful legislation as a consequence as this current administration.

It’s all too easy to blame Brexit for the inability of the Theresa May Tory Government to bring forward domestic laws; and I get the arithmetic – the Tories don’t now have a Commons majority and they don’t want to be defeated in Parliamentary votes, but this country is calling out for decisions to be made about our local public services, the NHS, social care. Our social security system isn’t working, and it’s not just the disastrous roll-out of Universal Credit, but issues like how we treat our pensioners too. Why not some justice for the 1950s WASPI women who had their state pensions delayed?

Our schools are starved of funds. Yes, funding in cash terms has slightly increased, but in real terms (the fact is there are more pupils in our schools now and then there’s also inflation to factor in) it’s actually been slashed by 8% nationally. As a consequence, some schools in Tameside have lost the equivalent of £400 or more per-pupil funding a year.

And poverty is on the rise again. Food bank use is up, homelessness increasing and, shamefully, life expectancy is falling for the first time in a generation. These are the issues we should be debating and holding Ministers to account over, and yet this Parliament is largely silent on them.

When Theresa May entered Downing Street she promised to tackle the ‘burning injustices’ but her record has been woeful on all these areas as austerity has continued to devour the social fabric of our country, with areas like Tameside hit very hard indeed.

Now the Tories will be choosing a new leader, and a new Prime Minister for the country. Yes, between 80,000 and 120,000 Tory members (depending on which figures you believe), and not the public, will decide who governs us. I won’t hold my breath that whoever is chosen will actually do anything about these real and pressing issues… but let’s hope I’m wrong.