Travelling circuses are no place for wild animals 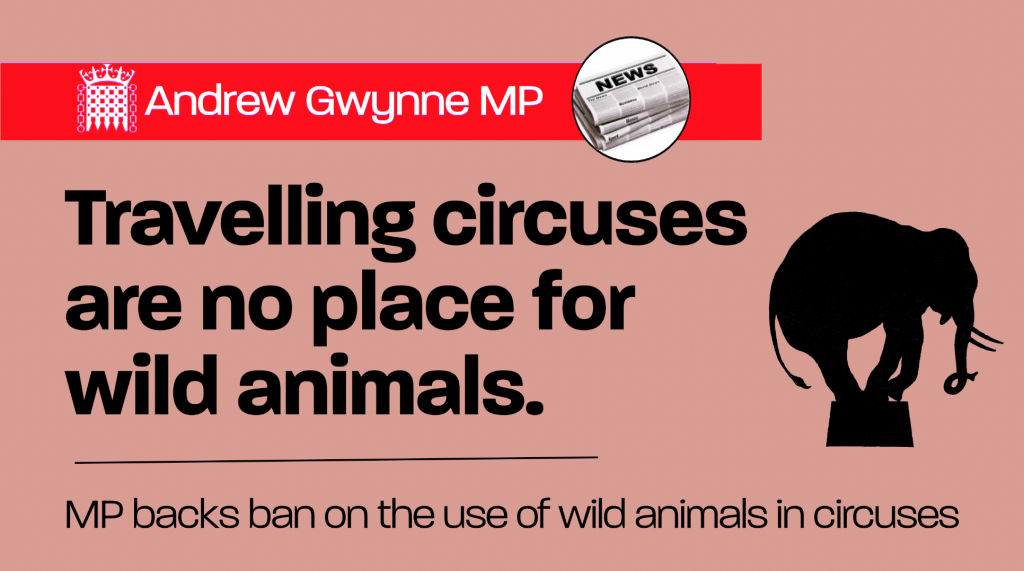 Denton and Reddish MP, Andrew Gwynne, is backing the Wild Animals in Circuses (No.2) Bill, which is being debated in the Commons today, and is supporting a Labour moratorium amendment to ensure that loopholes are closed which could see wild animals touring in circuses for a period after the Bill is enacted.

The Bill will make it an offence for an operator of a travelling circus in England to use a “wild animal” (defined as any vertebrate animal of a kind which is not commonly domesticated in Great Britain) in the circus. The Welfare of Wild Animals in Travelling Circuses (England) Regulations 2012 introduced an inspection and licensing regime for circus operators who use wild animals.  The regulations expire on 19th January 2020. Operators of travelling circuses in England which currently use wild animals will have until 20 January 2020 before it becomes an offence to use the wild animal in exhibition or performance.

“Many people are amazed that wild animal performances are still allowed in circuses in England and that’s why Labour supports this much delayed Bill.  It will be unacceptable if new wild animals, possibly including elephants and big cats, are put on a ‘last hurrah’ tour before the ban comes into force in January 2020.  Labour’s proposed moratorium amendment will make sure this cannot happen.

“I’m proud that Labour is the party of animal welfare. From the landmark Hunting Act to protecting the treatment of domestic animals under the Animal Welfare Act, we have always placed the welfare of animals high on the policy agenda. That’s why it’s also absolutely right that the party is supporting this Bill today.”