We must tackle homelessness – My Column for the Tameside Reporter 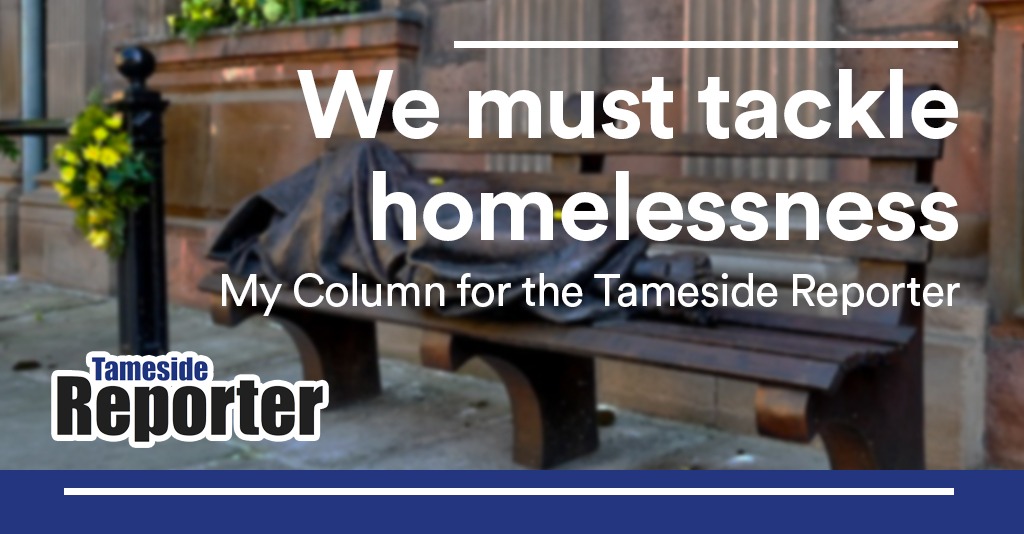 The other week I was in central Manchester for a meeting. I had to walk past St Ann’s Church to get to where I was heading, and a sculpture I’d not seen before sent the hairs on the back of my neck straight.

I don’t know whether you’ll have seen it, but just outside St Ann’s there’s a life size bronze bench with a covered rough sleeper lying along its length. The only part of the body showing was his feet. Feet pierced by nails.

You don’t have to be religious to understand or appreciate its symbolic significance, that the homeless man you’ve just walked past is the Christ; but placed outside a church, it sends out the unifying message contained in the Gospels (and many other religious texts around the world) that we should strive to treat others how we, ourselves, would wish to be treated.

The reason I mention this is because I believe it’s a stain on our society that we’ve allowed homelessness and rough sleeping to balloon in recent years. A combination of austerity, limited social housing stock and changes to the social security system have meant homelessness has more than doubled in 8 years, and rough sleeping is prevalent not just in the big cities, but in many smaller towns too.

The Mayor of Greater Manchester, has made it his mission (it’s not actually a responsibility of the Mayor’s office, so all credit to him) to secure a bed for every rough sleeper in Greater Manchester this winter, and he has been manically fundraising to try and make this possible. It’s a welcome short-term fix, but unless we tackle the underlying causes of rough sleeping, the problem will not be resolved.

On top of this there’s the hidden homeless. We should frankly be ashamed that there are thousands of families with children living in temporary accommodation or sofa-surfing. Yes they’ve a roof over their heads, but it’s no way to raise children and support families.

I sadly see it in my advice surgeries all too frequently. Recently, at a Dukinfield surgery, a young married couple came to see me. He’s in work, but not on enough to privately rent or buy. They’re living at her parents’ – sleeping on the sofa while their two children have mum’s old bedroom.

Turn back the clock to the mid-1940s. That man could’ve been my Grandad – a docker from Salford. His wife could’ve been my Gran who was from Scotland (they met when my Grandad was in the merchant navy and posted on the Clyde) and by this time had two very young children, one of them my mum. They were offered a three bedroom semi with a garden in Wythenshawe.

No such hope for my Dukinfield couple, where a combination of right-to-buy removing housing from the public stock, and then that stock not being replaced means waiting lists grow ever longer for even fewer properties.

So let’s tackle homelessness in the round. We need to build council homes at affordable rent again; we need to sort out our broken social security system that lets too many fall through the so-called safety net; and we need to offer hope to young people that they too have a future and a stake in this, the sixth richest country in the world. Until we resolve to do that, we aren’t treating others how we ourselves would wish to be treated, should, heaven forbid, we fall on hard times.