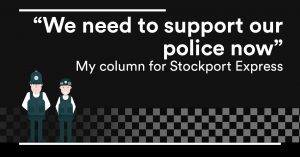 As a community we need to have a discussion about police cuts, now more than ever.

It’s a debate that’s been rumbling on since Tory austerity began in 2010 but was thrown into focus in the days and weeks that followed the deadly Manchester Arena bombing.

On that day we celebrated their courage, bravery and professionalism in the face of unimaginable suffering – now they need more than our vocal support, they need the budget to back it up.

It will not come as a surprise to many to find out that crime is rising in Stockport, Greater Manchester, and across the region

as criminals take advantage of the brutal cuts forced on to our police force. Since 2010, £180million has been axed from GMP’s budget, this has led to a sharp drop in the number of frontline police officers on our streets.

Budgets have been slashed so dramatically that GMP cannot provide the coverage that we are used to. It is little wonder then that my constituents across Stockport tell me that they rarely ever see a police officer on the high street.

On top of that GMP has been forced to close all police enquiry counters across the Denton and Reddish constituency, including Reddish Police Station.

Following the closure of the next closest counter service at Fred Perry House earlier this year my constituents from Reddish now have to travel all the way Cheadle Heath to speak to an officer – it’s just not good enough.

Community policing is crucial. Communities need to be able to see and speak with their police, whether that’s on the streets or in neighbourhoods. People need to feel able to report crime face to face, as well as building crucial relationships between the community and police. Sadly however, this is becoming less of a norm.

The decision to follow a politically motivated cuts agenda has had consequences.The Home Office has produced its own figures which show that recorded crime has risen by 31% in Greater Manchester in one year with violent crime, robbery and sexual offences seeing the biggest rises.

We need to support our police, we need more police on the streets and we need them now.